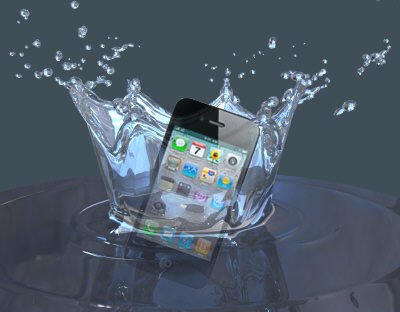 Today, I will depart from the usual focus of this blog, which is to focus on writing and my books.

Instead, I am going to sound off about an annoyance beyond belief.  Water. 70% of the Earth is covered with it.  Humans are 60% made of it. We drink it, wash in it and use it for everything from cooking to cleaning.  Yet, Apple has produced a product, which if it comes in contact with this “Rare” element, immediately, irreversibly and incredulously becomes $784 dollars worth of dead plastic.  The iPhone 4s and the 4s and the 3g and the 3.  Not a typo, two 4s’, that’s how many different phones I lost to WATER; that ubiquitous entity in which we are surrounded.

Now, I know you are saying, “How stupid can this guy be?” OR “Hey, Dropsy! Get an Otterbox!” (I have had three) And I admit that I dropped these phones. BUT Come on Apple. How tough, how difficult would it be to close up, and seal a phone, which has no moving parts?   The answer is, not too difficult, but the reason they don’t do it is… obsolescence.  They want us dropping our phone in puddles, sinks, toilets, bays, oceans, baths, birdbaths, pools, cups of coffee, oh and lastly, Hurricanes!!!  Yes, Sandy and her little floods and rivulets claimed my last 4s.

Add up $319 dollars to save the data (yeah I know, iCloud and backing up but…) $784 for a new phone, and that little refreshing dip took about a grand out of my lunch money.  Just like any other bully, Apple will say, “Why do you keep hitting yourself, why do you keep hitting yourself?” as they use your fist full of dollars to pay for the same act of Neptune over and over again.  Well I am sorry, but for 30 dollars more, max, they could have made the phone waterproof, but Nooooooooooo.  They’ve made almost $2,100 off me (don’t get me started on AT&T) because I chose to live on a planet that’s 70% Water!!!   I think I’ll try the Galaxy next.

iPhone is a registered trade mark of those sons-a-bitches at Apple Inc.