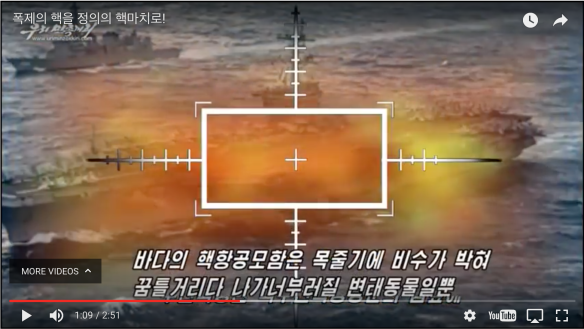 It’s only fiction ‘til it happens tm is my U.S. Reg. patent office; official slogan that conveys how scary the world is. In that, I make up a seemingly fictional plot or story element that is born to live only within the covers of a book. Then somehow, life imitates my art and…Wham, there it is in the news. So it’s almost getting routine to find that, last week, the NORKS, (slang for the totalitarian, North Korean regime) have released a video, which eerily echoes part of the plot of my novel, The God Particle.

In my book, a video of an attack on a U.S. aircraft carrier is released on the Internet. Although this is a showpiece of a larger and more intricate sub-plot, with a few twist and turns, it is the same video that the NORKS released last week and for almost the same reason!

Of course you can’t say that North Korea is a totalitarian state without the root word, “total” as in total-ly crazy. An American aircraft carrier, all by itself, is a defense system larger than most countries on earth have. And here’s a news flash to North Korea; we have a few more, and an entire arsenal of whop-ass behind it that such an actual attack would unleash. Ergo…totally crazy.