Years back I wrote a screenplay called, Looking Glass. It was my first ever effort at writing something longer than a school composition. Which I sucked at, ergo, writing wasn’t something I embraced until I was 28. Back then I had an idea based on the fact that a friend of mine’s father was the twin of a venerated academy award-winning actor – which no one was aware of at the time. The time being the pre-Internet, pre-social media days of the eighties. Anyway, armed with this secret, I imagined an epiphanous scene in a movie that as yet had no story or plot. The scene was the here-to-fore impossible shot of an actor and his doppelgänger coming face to face as the camera does a 360 all around them. Everyone in 1982 would have scratched their heads as to how we managed to do that shot. Today you can do it on a laptop!

But I “progress,” – So then the question was “what’s the plot” to put around this “socko” scene. Here’s what I came up with: what if my “twinned” star is a top Air Force pilot. So good he is the chief pilot of Air Force One. Then he gets a promotion! To a secret plane, more important than AF1. More dangerous, more expensive, more movie box office value. I called it, Looking Glass. I made it a converted 747 with the interior that rivaled a large nuclear submarine. Packed with electronics, defensive measures and the power to launch, run and win a nuclear war. I gave it technical “gee whiz” powers that were beyond that of any plane. Or so I thought. Turns out, I nailed one of the biggest secret programs ever. It was not even known to certain defense contractors, who at first commented on how my script was pure fiction, but then recanted with their tail between their legs as they dug deeper into a black program that turned out was my Looking Glass movie plane.

Why bring this up now? Forbes Magazine just ran a story;

It’s an article about how the Air Force is now seeking funding for upgrading the E4B NEACP. My baby, the one I designed in my screenplay. You see, as I pointed out in The Eighth Day;

At first blush, nuclear weapons research seemed a relic of America’s
paranoid, mutually assured destructive past…even though the Cold War
ended nearly two decades before, one tiny troublesome fact remained.
It seemed someone forgot to tell the Russian Strategic Rocket Force,
its commanders, and their nineteen missile divisions to go home,
it was all over. Instead, the Soviet’s mega death-tipped SS-20s and the
like were still targeted at Main Street, U.S.A., just like in the bad old days.
Our politicians had moved this undiminished nuclear threat to the back
burners of America’s collective consciousness, primarily by negotiating
away atmospheric and below-ground testing. It was good public relations
but it did nothing to reduce the stockpile of overkill both nations stored away
like dangerous nuts for a nuclear winter.

So, “news flash,” in terms of nuclear war, it’s still 1962. Nothing has changed. The nuclear sword of Damocles is still poised over our heads. The “nuclear clock” is still a few ticks from midnight. All that has changed in over 50 years is, no bomb shelters, no kids practicing going under their desks and putting there hands over their heads and no Conelrad Alerts. (look it up if you are under 40) 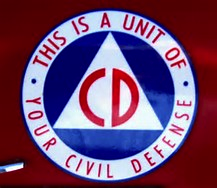 In my movie, there was always one Looking Glass plane in the air at all times… after all it was right in the middle of the cold war… Now a quote from today’s article (or my screenplay; take your pick);

…the media have ceased paying attention to the most likely way in which America might one day disappear forever.
America’s military hasn’t.  One of the four doomsday planes is kept on continuous alert and manned at all times.

Later in the article:

U.S. military planners take this threat so seriously that when the president [Mr. Obama] goes overseas, one of the doomsday planes always follows.  It needs to be nearby at all times, as does the military aide within a few yards of the president carrying nuclear launch codes and communications gear.

So there you have it, the moment when, “It’s Only Fiction ‘til It Happens,” was born. I will leave you with this new appreciation of an old recurring nightmare. Sleep tight.

Extra Credit worries: In that same screenplay back in 1982, religious fundamentalists conspired to hijack Looking Glass and start a nuclear war killing all the infidels by replacing my acting twin with his brother in that great scene!

In the Hammer of God, a critical clue in the murder of a leading scientist is provided by a close examination of a street camera video.  Even two years ago the editorial discussion was, “Is that two convenient?” I mean a video camera just happened to catch the moment? Is anyone going to believe that?

Well welcome to “It’s Only Fiction ‘Til It Happens!” Love it or hate it, today, there are more cameras everywhere than ever before.  Miniaturization, Wi-fi and Blue Tooth pretty much brings available retail technology into the realm of ‘Mission Impossible’ and ‘James Bond’.  You can literally just place a camera with a sticky back anywhere and remotely view, record or analyze it, over the Internet!  Radio Shack availability of what, 30 years ago, was top-secret spy craft; devices that would have entirely changed the Cold War.  This week the Israelis were accused of using camera-toting Vultures to spy on Syria!

There was an execution style killing in broad daylight on Broadway in New York.  A very similar “broad daylight” circumstance to the murder in Hammer of God.  And here again, the police have multiple videos to help them solve the case.

So in this case “Big Brother” watching is a good thing.  The question is, how much, how far, how invasive could it, should it go?  That is a question for society and ethicist to wrangle with.

Or maybe not so modern, in one of my screenplays, Smile… You’re Dead!, during an autopsy a New York coroner quotes from an British novel published in the 1800’s,

“The click of the camera-shutter would lead to the snap of the hangman’s trap – was how I believe it was stated in the novel Jack the Ripper.”

Lets hope that in the case of yesterday’s cold, deliberate, lunchtime execution “the flicker of the video camera leads to the snap of the electric chair’s switch!”

BS (BlogScript): It won’t because in New York State it could only lead to life without the possibility of parole. But I think it’s a snappier quote with the ‘electric chair’ –

So, you are deep in a scene, and the place you’re writing in disappears. A narrow tunnel into your screen draws you into the world you’ve created – a world where your characters are engaging each other and revealing plot and personality traits that enrich your story. As happens to many writers who are ensconced in that ‘Zone’, the characters start talking to you. Or more accurately, start making up their own dialogue and taking their actions in directions you didn’t intend when you sat down to write.

Some people would say that this is a mild form of insanity, the kind which afflicts all writers, but I’ve come to believe that it’s really the M.U.S.E at work. M.U.S.E, in the non-classical sense, standing for Metaphysical Universal Story Enlightenment. I’ll explain. I’m writing a scene that takes place in a restaurant. Before I know it, my character is in the men’s room. Before I know why, someone is intentionally in the men’s room to have a conversation with him. My hero demurs – doesn’t want to have a conversation in the men’s room, and tells him to come to the office. That whole bit of dialogue winds up with the intruder giving him a dining tip of, “Try the halibut.” At the time I remember thinking, “strange thing for me to write, Halibut?”, but I wrote it.

Two weeks later, on a beach in Puerto Rico END_OF_DOCUMENT_TOKEN_TO_BE_REPLACED

Jules Verne wrote fiction… then it happened. I know because I have walked on the U.S.S. Nautilus. The novelist is usually way out ahead of reality. Here I will share insights into my process as an author and other writer’s moments of prescience.

I will also share real events that could have inspired the ‘thrillogy’... except, I had already written similar scenarios before they happened. Seemingly ripped from the headlines, it's only fiction... 'til it happens!

I look forward to connecting with you: Fans, Skeptics, Believers; you may be all 3. Please share your prescient writing’s, thoughts, ideas, critiques, or web links as comments to my blog posts (click the "thought bubble" beside each title).

Stay tuned for previews of 2012's completion of my thrillogy: The God Particle. For now, connect with me through your favorite social media below & share what you like.