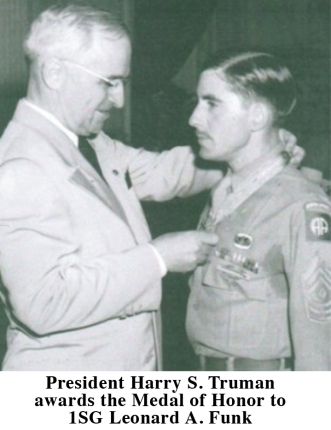 Last week I shared with you the Medal of Honor exploits of Beauford T. Anderson.  As I was researching recipients for the lead character of my upcoming book, Constantine’s Dagger, I came across a second man of honor who so perfectly fit a supporting character in the book that I had to infuse his spirit into my character’s actions, as well. In fact, from a story perspective; two friends from the neighborhood who both perform intrepidly in war, became the cornerstone of the third act of the book. It is with great pleasure that I share this post from the website WWII in Color.

Warning, this is an account of war, the language and the actions describe below are not for the faint of heart. I’ve included at the bottom, the less “colorful,” official citation with non-offensive language.

One of the more darkly humorous episodes of warfare occurred on 29 January 1945, in Holzheim, Belgium. Funk and his paratroopers were assaulting the town, and he left a rearguard of 4 men, while he scouted ahead to link up with other units. Those 4 men had to guard about 80 German prisoners.

Another German patrol of 10 happened by and overwhelmed the 4 Americans, freeing the prisoners and arming them. When Funk returned around the corner of a building, he was met by a German officer with an MP-40 in his stomach. The German shouted something at him, and Funk looked around.

There were now about 90 Germans, about half of them armed, and 5 Americans, disarmed except for Funk. The German shouted the same thing at him again, and Funk started laughing. He claimed later that he tried to stop laughing, but the fact that the German was shouting in German touched a nerve. Funk didn’t speak German. Neither did any of the other Americans. Why would the German officer expect him to understand?

His laughter and non-compliance caused some of the Germans to start laughing. Funk shrugged at them and started laughing so hard he had to bend over. He called to his men, “I don’t understand what he’s saying!” All the while, the German officer was shouting more and more angrily.

Then, quick as lightning, Funk swung his Thompson submachine gun up and emptied the entire clip into the German, 30 rounds of .45 ACP. Before the other Germans could react, he had yanked the clip out and slammed another in and opened fire on all of them, screaming to his men to pick up weapons. They did so, and proceeded to gun down 20 men. The rest dropped their weapons and put their hands up.

Then Funk started laughing again and said to his men, “That was the stupidest fucking thing I’ve ever seen!”

That stupidest fucking thing earned him the Medal of Honor.

The moment I read that account I knew it was detailing a possible way my character, class-clown and cut up, Joey from the lower Eastside, might have acted. Below is the “G” rated official citation. 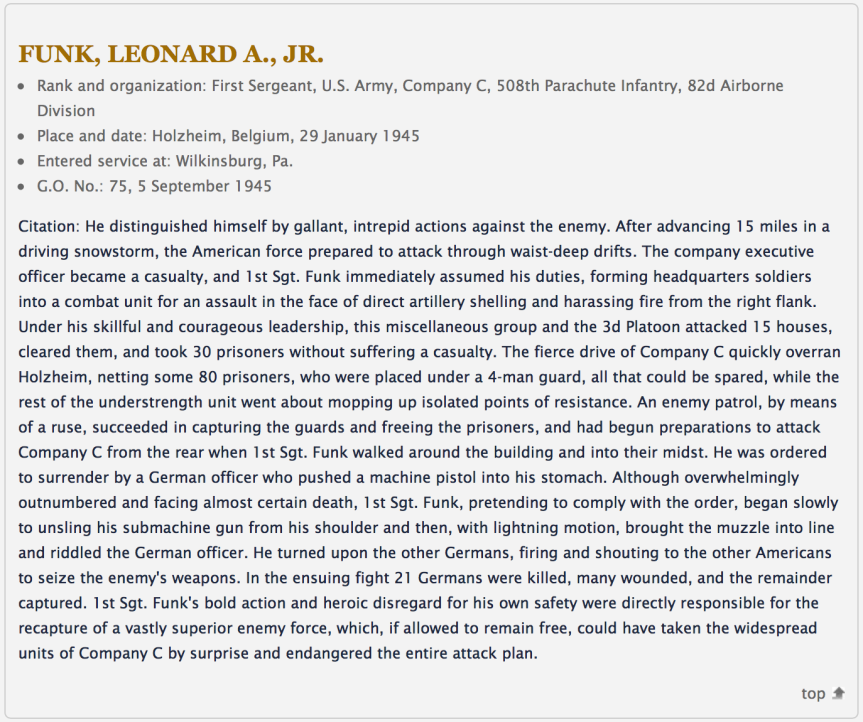